This juice is very acidic due to its hydrochloric acid content and is rich in enzymes. As noted above, the walls of the stomach are protected from digestive juices by the membrane on the surface of the epithelial cells that line the lumen of the stomach; this membrane is rich in lipoproteins, which are resistant to attack by acids. The gastric juice of some mammals (eg, calves) contains the enzyme renin, which binds milk proteins and thus removes them from solution and makes them more susceptible to the action of a proteolytic enzyme.

The gastric secretion process can be divided into three phases (cephalic, gastric, and intestinal) that depend on the primary mechanisms that cause the gastric mucosa to secrete gastric juice. The phases of gastric secretion overlap and there is an interplay and some interdependence between the neural and humoral pathways. The cephalic phase of gastric secretion occurs in response to stimuli received by the senses, that is, taste, smell, sight, and hearing.

This phase of gastric secretion has a completely reflex origin and is mediated by the vagus nerve (tenth cranial nerve). Gastric juice is secreted in response to vagal stimulation, either directly by electrical impulses or indirectly by stimuli received through the senses. Ivan Petrovich Pavlov, the Russian physiologist, originally demonstrated this method of gastric secretion in a now-famous experiment with dogs. The gastric secretion phase is mediated by the vagus nerve and by gastrin release. The acidity of the gastric contents after a meal is buffered by protein, so it generally stays around pH3 (acidic) for about 90 minutes.

Acid continues to be secreted during the gastric phase in response to distension and to peptides and amino acids that are released from proteins as digestion proceeds. The chemical action of free amino acids and peptides stimulates the release of gastrin from the antrum into circulation. Therefore, there are mechanical, chemical, and hormonal factors that contribute to the gastric secretory response to eating. This phase continues until the food has left the stomach. 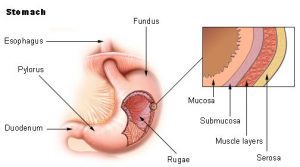 The intestinal phase is not fully understood due to a complex process of stimulation and inhibition. Amino acids and small peptides that promote gastric acid secretion are infused into the circulation; however, at the same time, the chyme inhibits acid secretion. Gastric acid secretion is an important inhibitor of gastrin release. If the pH of the antral contents falls below 2.5, no gastrin is released. Some of the hormones that are released from the small intestine by the products of digestion (especially fats), notably glucagon and secretin, also suppress acid secretion.

Although the stomach absorbs a few of the products of digestion, it can absorb many other substances, including glucose and other simple sugars, amino acids, and some fat-soluble substances. The pH of gastric contents determines whether some substances are absorbed. At low pH, for example, the environment is acidic and aspirin is absorbed from the stomach almost as quickly as water, but as the pH of the stomach increases and the environment becomes more basic, aspirin is absorbed more slowly.

During a duodenal contraction, the pressure in the duodenal bulb increases more than in the antrum. The pylorus prevents reflux into the stomach by closing. The vagus nerve plays an important role in voiding control, but there are indications that the sympathetic division of the autonomic nervous system is also involved. Several of the peptide hormones of the digestive tract also have an effect on intragastric pressure and gastric movements, but their role in physiological circumstances is unclear.

Reagecon is the largest producer of Physical & Chemical Standards, as well as being a global supplier of Laboratory Equipment Consumables and Chemicals.